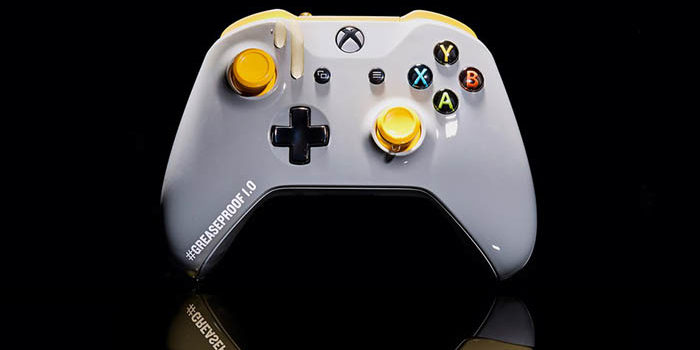 microsoft34 xbox13 xbox one4
Microsoft has announced the next big thin in gaming innovation: grease-proof controllers. The rub (ha) is that they only made 200 of them. And...

Microsoft has announced the next big thin in gaming innovation: grease-proof controllers. The rub (ha) is that they only made 200 of them. And they’re only available in Australia. Through an online giveaway. If your excitement just deflated faster than a popped balloon, you’re not alone. We also wanted this awesome controller. Just look at it! It’s a greaseproof controller! How cool is that!

The hilarious(ly awesome) greaseproof controller is a special edition giveaway through Microsoft’s social media. It’s only being given away in Australia, to make matter worse. Why a greaseproof controller, you ask? Why, to keep the chicken dinner’s grease from ruining your gamepad! That’s right, this goofy innovation is in honor of PlayerUnknown’s Battlegrounds coming to Xbox One. PUBG is an immensely popular battle royale shooter that has been out on PC for some time. It’s arrival on consoles is a big deal.

In PUBG, the players fight for dominance in an ever-shrinking map with limited resources. You only have one life, so you have to be careful that you don’t get caught out of position! With cunning, fast reflexes, good equipment and a dash of luck you could end up winning the whole thing! If you do, you’re treated to the ridiculous victory phrase “winner, winner, chicken dinner.”

So, there are only two hundred of these suckers in the world and they’re not even for sale. That’s truly unfortunate, as we could definitely think of some uses for this technology. Heck, we here at GoodFind would use the heck out of a greaseproof controller. Eating potato chips and playing Halo go together like peanut butter and jelly! We’re sure we’re not alone in this: how many times have you looked at your greasy controller and wished it was greaseproof?

Come on Microsoft, your fans would totally pay money for a greaseproof controller! What’s that, you say? We should stop being gross and eating greasy snacks while we play video games? Wait, you’re saying we should stop gaming so much and get back to writing articles on tech and news? Well, those are solid points, but we’d like to offer a rebuttal. Look at how awesome that yellow-on-gray controller looks! Yeah, that’s all we’ve got. Stay frosty everybody! If Microsoft announces a mass-market release for this revolutionary tech, we’ll be sure to let you know!