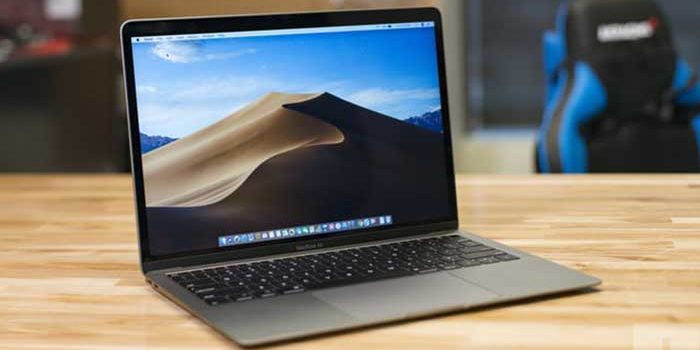 apple170 macbook air2
While Apple continues smartphone dominance with the iPhone X line, they’ve been struggling with their laptops recently. Competitors like Microsoft have been out-performing them...

While Apple continues smartphone dominance with the iPhone X line, they’ve been struggling with their laptops recently. Competitors like Microsoft have been out-performing them for the past few years. Is the MacBook Air 2018 poised to change that, or will it fall flat?

At first glance this is very clearly a new beast than previous generations. It’s incredibly thin and light and stows away in a bag very easily. It’s a bit bigger than the 12-inch MacBook Pro, oddly, though it’s a bit smaller than the 13-inch model. It’s something of an in-between of those two laptops in more ways than one.

The screen is big and gorgeous, as you’d expect from any Apple product. The bezels around the screen have been pulled back significantly, making this a much more modern-looking device. The keyboard is a bit shallower than the previous MacBook Air but it still feels fine for typing.

This is an upgraded machine from its previous incarnation in many ways. Notably, this version is sporting an 8th-Gen i5 processor, more RAM options and generally more power. It’s not quite as mighty as the 13-inch MacBook but it’s much more portable. Likewise, it blows the 12-inch MacBook out of the water but it’s a bit bulkier than that device.

For most common tasks this is going to be an excellent productivity machine. If you want a device from which you can type up assignments, listen to music, do research and watch YouTube, you won’t be disappointed. Photo and video editing are a dream, as usual for Macs. Professionals, college students and entrepreneurs alike will find this device plenty powerful enough for most tasks.

This is an excellent entry into the MacBook line. Acting as a midpoint between the 12-inch and 13-inch designs, the MacBook Air 2018 comes in a full $100 cheaper than either of those devices. It retails for $1200, though you can likely find it on sale for up to $100 less in some places. All in all, this is a great productivity laptop with a good balance of portability, power and sleek design that will impress any Mac fans.