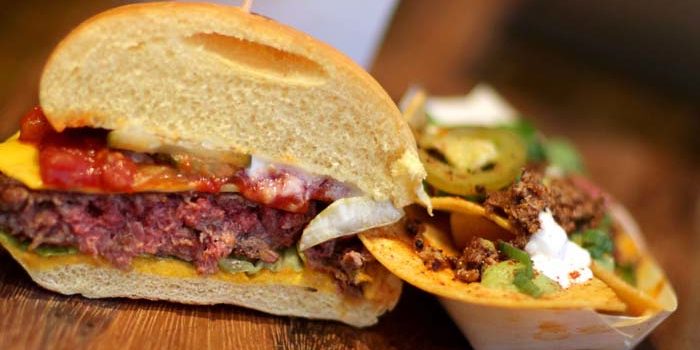 Burger1 Food4 Impossible Burger1 Meat Substitutes1
While everyone loves a hamburger, there are some issues with eating animal meat. For one thing, some say its unethical to take the life...

While everyone loves a hamburger, there are some issues with eating animal meat. For one thing, some say its unethical to take the life of a living animal for food. Even if you don’t agree with that point, the science is clear that red meat is hardly good for you.

But burgers are so good! Why can’t we have a burger that isn’t bad for you and doesn’t require cows to be slaughtered? Good news, compassionate burger-lovers: the Impossible Burger provides just that. A delicious, beef-like patty made entirely from plant matter.

What It’s Made From

The Impossible Burger isn’t a soy or lentil or bean patty that’s just shaped like a burger. No, instead, it’s made in a lab setting, from potato and soy proteins, and made to look and taste just like animal meat. Included in the patty are coconut and sunflower oils, which act as the burger’s fat and let it sizzle on the grill.

Meanwhile, the whole thing is held together by methylcellulose, a binding agent that also acts as a source of fiber. The burger then uses a type of heme, the oxygen-carrying molecule found in all living things, as a source of flavor. The lab uses soy heme, injected into yeast cultures and then harvested en masse, to give the burger a meat-like flavor.

It tastes like beef, full stop. If you’re a vegetarian who misses burgers, or a meat-eater who wants to cut back on eating animals, this burger hits the spot. That’s a hard trick to pull off! In fact, we’ve seen people who are vegetarians actually find the Impossible Burger “gross,” and “hard to eat” due to its greatly meat-like consistency and flavor.

Generally speaking, the Impossible Burger is a bit more expensive than a normal meat patty. For instance, many restaurants sell the Impossible Burger for $13, where the normal burger tends to be around $9. However, we feel its worth it to be kinder to your body and the environment. After all, every little bit helps.