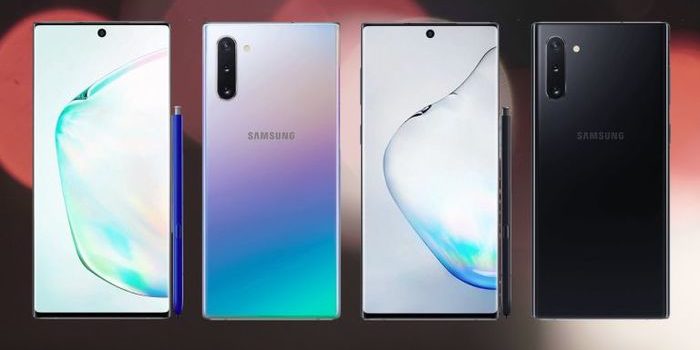 Samsung’s Galaxy Note 10 is said to be one of the best and most powerful phones of 2019. The Note 10 is launching today, August 7, but that hasn’t stopped the leaks and videos – here’s everything we know.

To announce the launch of the new Galaxy Note 10 today, August 7, Samsung is hosting a live press conference in the Big Apple, Brooklyn to be exact. The launch event kicks off at 1PM PST / 4PM EDT (9PM BST). Rumor has it that with all the leaks over the past few months combined, it is doubtful that Samsung will have very many surprises in store for us. Here’s what we know.

Assuming the combined Galaxy Note 10 leaks are legitimate, Samsung will be announcing two versions of the new Galaxy Note today – The Note 10 and the Note 10 Plus. Equipped with 6.3-inch and 6.8-inch screens, the new smartphones will certainly not disappoint. According to the leaks, they will both be sporting an all new S-Pen, which will basically serve as your personal magic wand with air gestures for your new smartphone. But wait, there’s more!

Alongside a rumored “Superfast Charge” that will feed the Note 10 hours of battery juice in just a matter of a few minutes, a Verizon ad campaign has gone live to promote the new smartphone, confirming it to include a 5G option when purchasing. This brings the total number of new Galaxy Note 10 to four options! What does 5G mean?

5G is the latest and fastest version of cellphone technology, made to download and upload at lightning speed! So, whatever you are currently doing on your smartphone, you’ll be able to do it faster and better with the new Galaxy Note 10 5G option. But we know the real question you’re wondering – How much will this cost you?

Well, there is no getting around the fact that with every new smartphone that comes out, the higher the price tag that comes with it. When we look at the Note 9, there is no doubt that it is a very, very expensive phone, and we are not expecting the Note 10 to be any less pricey. While the price has not yet been officially confirmed, we have the scoop.

While the Galaxy Note 9 was jam-packed with worthwhile features, in many ways it felt like only a small upgrade from the Note 8, released just the year before. We have high hopes from the Samsung Galaxy Note 10 to justify the hefty price tag that comes with it.

While all recent Samsung smartphones have included water resistance, the Galaxy Note 10 is equipped with protection that is expected to have a significantly stronger defense against high-pressure and high-temperature water. That’ll come in handy the next time you drop your phone in some water.

In the leaked clip, it appears that the Galaxy Note 10+ comes with a small punch-hole cut out for the front camera. While the top smartphones that are currently in the market have the capability to record with HDR video, the Galaxy Note 9 does not. This is a very weak point to an otherwise great camera.

We are hopeful that the Galaxy Note 10’s high price point will include not only HDR recording, but like many competitors a 4K HDR recording feature. Could the imminent release of the new smartphone race to the top of the best Android Phones? There is not a long wait to find out.